Where Can You Smoke in Thailand? (Vape & Shisha Laws)
Skip to content Thailand often makes news for its party-Esque atmosphere, an embodiment of social culture and excessive nightlife. Tourists are often fooled by exotic expectations, expecting everything to be allowed. However, smoking cigarettes, vaping, and hookah are taboo subjects.

So, are you allowed to smoke in Thailand?

While smoking cigarettes is allowed for adults, over the age of 20 years old, it is still a rather secluded practice. Smoking is prohibited in a number of spaces. Vaping and hookah, on the other hand, are prohibited in the country, and the consequences of getting caught can result in fines and jail time.

Thailand is also globally known for its excellent health services and hospitals, which explains the need for strict precautions to prevent the dangerous risks of lung damage. Even then, the recent legalization of marijuana has left room for curiosity on when vaping and smoking will be legally at ease.

Are You Allowed to Smoke in Thailand?

Smoking is allowed in particular areas around the country, mainly open-air areas with 5-meter exclusion zones from the main entrance or exit of the building.

Otherwise, smoking in most public installations or places is prohibited. If you are 20 years of age, you have easy access to cigarettes, which are sold at Family Marts and 7-Elevens on every corner. (Source)

Currently, the last recorded Thailand smoking rate was from 2020, with an annual change of 0.40% compared to the prior year. However, this found that 22.10% of people in Thailand smoke above the age of 15. This is considered a low percentage compared to other countries such as Serbia, Turkey, or Malaysia. Before implementing strict laws, Thailand had a high rate of 31.70% in the early 2000s. (Source)

According to Tobacco Surveys, 2.2% of women and 40.5% of men are smokers in Thailand.

Over 100,000 people in the country die from smoking-related diseases, most of which are male deaths. Most of the 38.6% of younger adults turn towards smoking while being exposed to it in public areas. While tobacco is the main contributor to the market in Thailand, it is also a difficult topic to discuss, which can come hand in hand with other various smoking-related products such as e-cigarettes and hookahs. (Source)

While smoking contributes to more deaths and usage in the country, it is still not prohibited entirely. As of now, you can spot smoke-free areas around the country.

However, you will not see public access to vaping or shisha. With people getting arrested, there are fewer problems regarding the usage of all products. Thailand is working towards creating a safer place for young adults to grow up.

What Are Some Places in Thailand Where Smoking Is Banned?

According to Holidify, smoking inside indoor areas is almost permanently banned, except if cafes and restaurants have their own specific private smoking areas.

Here is a list of a few public places where laws prohibit you from smoking: (Source)

Can You Smoke in Thai Airports?

However, Bangkok’s main Suvarnabhumi Airport does have specific areas where you can smoke. The indoor space of the airport prohibits smoking entirely and calls for a 5000 THB (145 USD) fine. 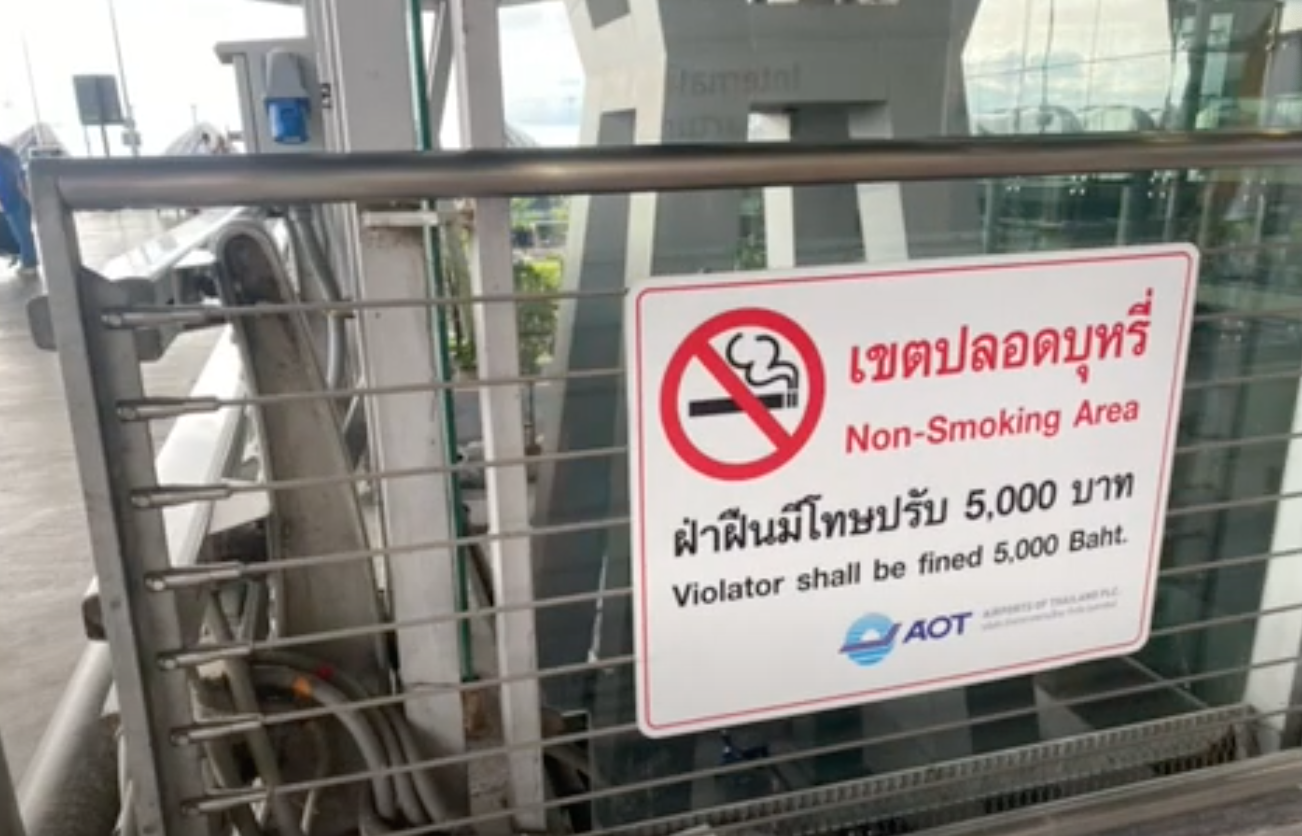 However, you will find that at the entrance and exit gates of the airport, Gate 1 and Gate 10, respectively, there are smoking areas with pots, where people are allowed to light cigarettes in private.

Can You Smoke on Thai Beaches?

Smoking in Thailand is prohibited on 24 beaches, which all call for strict prohibitions. These beaches are as followed:

Is Vaping Legal in Thailand, and Can I Bring a Vape Into the Country?

Although vaping has not been defined as prohibited by Thai law, Section 20 of Customs ATC restricts electronic cigarettes and other standard vaping products. Some say this is a way for the government to ban vaping without stating its name and drawing attention to the cause.

Public Health Minister Anutin Charvirakul addresses the health issues with vaping and how this could lead to detrimental health concerns for the coming generation that is making vaping popular.

Since the legalization of Weed in August, people have been questioning how dangerous vaping can be compared to drugs and smoking cigarettes. There remains a growing market of what could be a 6 billion THB industry for vaping.

Amongst those fined are celebrities and tourists in the country. In 2019, a French woman was fined 40,000 THB (1,156 USD) and deported back to her country. She was stopped while riding a scooter and had possession of a vape on her. Not only did this experience cause her to go back to her country under unplanned morale, but she has to pay a further 260,000 THB (7,518 USD) in legal fees.

In the same way, a Dutch singer was arrested for vaping in 2019 and forced to pay 30,000 THB (867 USD) in payments. This shows that it does not matter if you are a foreigner or a local; vaping illegally in Thailand has severe punishments and consequences.

Even then, people continue to vape in private. It can depend on how easily you can negotiate when getting caught or if you end up facing a terrible jail time in debt. Fines can vary depending on whether you were caught using the vape or having several illegally imported pieces of equipment on hand. (Source)

Is Smoking Shisha/Hookah Legal in Thailand?

According to the iTravel Channel, Thailand was a safe space for shisha about six years ago. You could easily find hookah, also known as shisha, at night market restaurants, pubs, bars, and cafes. It would be the ultimate hang-out spot for tourists, young adults, and primarily millennials or university students. Seenspace and Bombay Blues were seen as the most famous outdoor cocktail bars in Thonglor, which served delicious beer, thin-crust pizza, and shisha to their customers. (Source)

While this candy-flavored smoke was seen as a fun nighttime activity across Thailand, this Middle Eastern craving lasted only a short time. Pattaya, Phuket, Bangkok, and Koh Samui, all famous shisha attractions, have now been forced to close down their hookah stations.

Although water-flavored tobacco is burned at a much lower temperature than cigarettes, Thailand is cautious regarding the toxins being spread into the air. Just like electronic cigarettes, Thai officials have placed severe fines for locals being found in possession of shisha. If restaurants break the law, licenses can be revoked, and daily inspections will occur. (Source)

Smoking is not entirely banned in the country, as you can find some smoke-free spots to enjoy a cigarette.

However, vaping and shisha are prohibited in the country, and since the early 2000s, you will not spot a free environment where you could use an electronic cigarette free of harm.

Thailand continues to place safety regulations on all aspects, even though it just recently legalized weed and could further profit off a smoking empire.